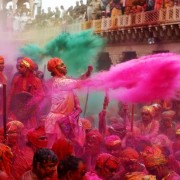 Holi is a religious festival celebrated by Hindus all over the world.  Following Diwali, it is considered the second biggest festival on the Hindu calendar.  Holi is also known as the Festival of Colours due to the playful practice of throwing coloured powders over one another in the streets and open places.

The Holi festival is named after Holika, the aunt of Prince Prahlad, who unsuccessfully attempted to aid her wicked brother Hiranyakashipu by casting the little boy into the flames of a fire.   Students will enjoy discovering this story with its many twists and turns, and its timeless theme of celebrating child protection.

Holi is celebrated all over India, but the celebrations that take place in the region of Braj (near New Delhi), where Lord Krishna appeared and had his pastimes 5000 years ago, are cherished with most affection by many Hindus.