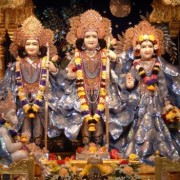 Lord Rama appeared on Earth many thousands of years ago during the Hindu age of Treta, on the ninth day of the waxing moon, in the Indian lunar calendar’s month of Chaitra (March-April).  Each year Hindus celebrate this day as Lord Rama’s birthday (or “appearance day”, since Rama does not actually take birth like a mortal being).  The Rama Navami puja rituals, chanting of Shri Rama, and other celebrations take place in the hours just before noon, reaching their peak at 12.00 noon, the moment of the Lord’s appearance.